Check out a first listen here http://www.youtube.com/watch?v=uPDHoF781Hs and also the info on the cd (the first few bits of info as we know it so far so stay tuned for more as it becomes available): 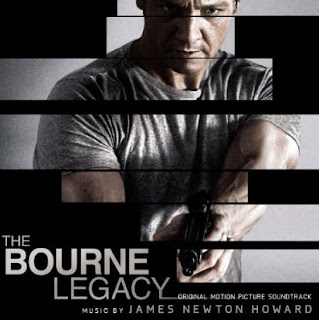 Audio CD (August 7, 2012)
Number of Discs: 1
Format: Soundtrack
Label: Varese Sarabande
Original soundtrack to the 2012 motion picture with music composed by James Newton Howard (The Hunger Games, Snow White And The Huntsman, I Am Legend). Also includes a new version of 'Extreme Ways' by Moby. The narrative architect behind the Bourne film series, Tony Gilroy, takes the helm in the next chapter of the hugely popular espionage franchise that has earned almost $1 billion at the global box office: The Bourne Legacy. The writer/director expands the Bourne universe created by Robert Ludlum with an original story that introduces us to a new hero (Jeremy Renner) whose life-or-death stakes have been triggered by the events of the first three films. For The Bourne Legacy, Renner joins fellow series newcomers Rachel Weisz, Edward Norton, Stacy Keach and Oscar Isaac, while franchise veterans Albert Finney, Joan Allen, David Strathaim and Scott Glenn reprise their roles. Composer James Newton Howard follows in John Powell's footsteps, taking on the Bourne franchise for this next film chapter evolution of Ludlum's blockbuster saga.

Check it out on amazon.com here http://www.amazon.com/Bourne-Legacy-James-Newton-Howard/dp/B008DCHRIA/ref=wl_it_dp_o_pdT1_nS_nC?ie=UTF8&colid=37FHEQFL7XLQK&coliid=I2FUVY03YBQCHB
Posted by Unknown at 10:52 PM No comments:

Lots of news on the much awaited release. 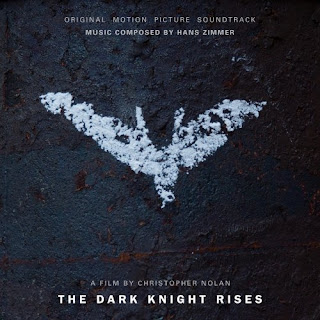 Firstly, it streams (the whole score) over at Empire and you can listen to it here:

Second on the row, there's the new interview with Hans Zimmer and Christopher Nolan on the whole Batman Thing. Read the interview here and here:

The score will be available on special limited edition vinyl and you can view details on this release here:

Be sure to read the Cinemedia press release as well:


(July 10, 2012 – Los Angeles, CA) – On July 17, 2012, WaterTower Music will release The Dark Knight Rises : Original Motion Picture Soundtrack at all physical and digital retailers. Academy- Award® winning composer Hans Zimmer teams for the fourth time with writer/director Christopher Nolan to create the music for the final installment of his Dark Knight Trilogy.  The CD version of the soundtrack will contain an exclusive link to unlock three bonus tracks, while a deluxe version of the soundtrack, with three additional tracks, will be available digitally. A limited edition vinyl configuration is set for release on September 4. Following the success of his experiential app for Inception, which boasted 5 million downloads, Zimmer is preparing to unveil a new iPhone app for The Dark Knight Rises that will provide fans with a more immersive musical and sonic experience into the world of Gotham City. Details for the new Hans Zimmer app will be announced soon.
“I thought after we finished the last one [The Dark Knight], that was it,” said Zimmer.  “There was nothing else we could possibly do.  At the same time, when I started reading this script, I instantly knew that there was a whole world out there that I hadn’t even touched yet.”
“I have never worked with someone so dedicated to the idea that the real risk is in playing it safe,” said Nolan.  “Hans taught me that you sometimes have to go in what appears to be the wrong direction to discover all the possibilities, and that without exploring those possibilities you can never do anything truly exceptional.  He sets creative goals for every film that are higher than you ever thought practical…or even reachable.”
Zimmer added, “We’re comrades in arms, the way we try to cheer each other on and try to really do the best work we possibly can. And part of that is you have to be prepared to not hold back. You have to put everything into the movie.”
Hans Zimmer has scored over 100 films, grossing more than 19.6 billion dollars at the box office worldwide. He has been honored with the Academy Award®, 2 Golden Globes, 3 Grammys, an American Music Award, and a Tony Award.  In 2003, ASCAP gave him the prestigious Henry Mancini award for Lifetime Achievement for his impressive and influential body of work. He also received his Star on the Hollywood Walk of Fame in December 2010.  Some of his most recent works include Madagascar 3: Europe’s Most Wanted, Guy Ritchie’s Sherlock Holmes: A Game of Shadows, and Rob Marshall’s Pirates of the Caribbean: On Stranger Tides.
Warner Bros. Pictures’ and Legendary Pictures’ The Dark Knight Rises is the epic conclusion to filmmaker Christopher Nolan’s Dark Knight trilogy.
The film  stars Christian Bale, Michael Caine, Gary Oldman, Anne Hathaway, Tom Hardy, Marion Cotillard, Joseph Gordon-Levitt, and Morgan Freeman.  Christopher Nolan directed the film from a screenplay by Jonathan Nolan and Christopher Nolan, story by Christopher Nolan & David S. Goyer.  Emma Thomas, Christopher Nolan and Charles Roven produced the film, with Benjamin Melniker, Michael E. Uslan, Kevin De La Noy and Thomas Tull serving as executive producers, and Jordan Goldberg co-producing. “The Dark Knight Rises” is based upon Batman characters created by Bob Kane and published by DC Comics.
Warner Bros. Pictures presents, in association with Legendary Pictures, a Syncopy Production, a Film by Christopher Nolan.  Opening in theatres and IMAX on July 20, 2012, the film will be distributed worldwide by Warner Bros. Pictures, a Warner Bros. Entertainment Company.  The Dark Knight Rises has been rated PG-13 for intense sequences of violence and action, some sensuality and language.
The Dark Knight Rises -- Original Motion Picture Soundtrack and The Dark Knight Rises – Original Motion Picture Soundtrack Deluxe Version on WaterTower Music will be available digitally and in stores on July 17, 2012.
###
www.thedarkknightrises.com

Album Available For Pre-Order On Amazon And iTunes

Posted by Unknown at 8:07 PM No comments: