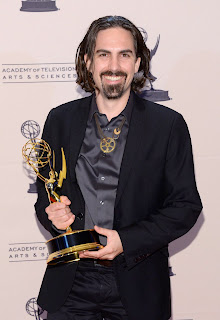 On September 15, 2013, composer Bear McCreary earned his first Emmy® Award for the Main Title Theme for DA VINCI’S DEMONS at the Creative Arts Emmy Awards in Los Angeles.  McCreary had been nominated one previous time in the same category for HUMAN TARGET.

After he won, he was quoted:

“To be nominated alongside some of the most exciting composers working in the industry was, itself, a tremendous honor.  I am totally overwhelmed by this win,”


McCreary credits his collaboration with show creator David S. Goyer as to what led to his first Emmy Award win.

“I must share this award with series creator David S. Goyer.  When I played him my first demo for the main title, he gave me the greatest feedback a producer can bestow.  He said the music was too short!” “The theme was so catchy, he wanted to hear more of it.  So, he re-cut his first episode and nearly doubled the length of the Main Title sequence, giving me the opportunity to expand on my ideas.  Now that the Main Title Theme and Main Title Design have both won Emmys, I think its safe to say that Goyer had the right idea!”


McCreary’s sweeping orchestral score for DA VINCI’S DEMONS was meticulously researched to accurately represent the time period, without being bound to it.  His score combines full orchestra, Renaissance instrumentation, choir and ethnic soloists with the renowned Calder Quartet and surging contemporary synthesis.


It’s this sort of out-of-the-box thinking that led WIRED Magazine to call McCreary a “Secret Weapon” in a recent issue.  His unique combination of atypical instrumental background (he is a professional accordionist) with rigorous classical training prepared him to compose for disparate genres.  By the age of 24, McCreary was launched into pop culture history with his groundbreaking score to Syfy’s hit series Battlestar Galactica, for which he composed “the most innovative music on TV today” (Variety). It “fits the action so perfectly, it’s almost devastating: a sci-fi score like no other” (NPR).  Io9.com declared Bear McCreary one of the Ten Best Science Fiction Composers of all time, listing him alongside legends John Williams, Jerry Goldsmith and Bernard Herrmann.

This fall McCreary’s music can be heard on the new series Marvel’s Agents of S.H.I.E.L.D. McCreary continues to write for the television show The Walking Dead.  Recently he lent his talents to Syfy and Trion World’s groundbreaking entertainment experience, Defiance, a combined launch of a MMO videogame. His film projects include Europa Report and Knights of Badassdom.  His other credits include critically acclaimed scores for series such as Terminator: The Sarah Connor Chronicles, Eureka, Human Target, and The Cape. His videogame credits include SOCOM 4 and Dark Void.

Check out more on his official site:
www.bearmccreary.com

Based on PR from Cinemedia
Posted by Unknown at 8:32 AM