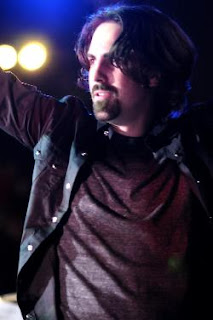 www.bearmccreary.com
Posted by Unknown at 10:42 PM No comments:

(July 25, 2013—Úbeda, Spain) –  The second annual PlayFest -- Music, Animation and Videogames Festival, moves to Fuengirola in Málaga, Spain from September 5-8, 2013.  Playfest is a unique event dedicated to one of the fastest growing industries today that will bring together leading artists, composers and companies to participate in master classes, conferences, screenings and concerts.

This year’s concert will spotlight music from Star Trek Video Games (presented by BuySoundtrax Records) and conducted by Kevin Kiner (Star Trek: Borg), the works of composers Jason Graves (Dead Space, Tomb Raider) Oscar Araujo (Castlevania), and Cris Velasco (God of War, Mass Effect 3).  The headliner of the concert will be a special presentation of the music Lorne Balfe (Assassin’s Creed 3, Beyond: Two Souls), which he will conduct -- portions of which will be selected by you – the fans!  The concert will be presented at the Fuengirola castle – a magical place for art and music to merge.

Balfe invites fans to offer suggestions on what themes to include in his performance by tweeting their suggestions to @LorneBalfe with the #PlayfestLB.

PlayFest is organized by Leitmotiv Music, with the cooperation of the City of Fuengirola and the Málaga Provincial Council, BuySoundtrax Records and BSOSpirit. Playfest will take place in Málaga, Spain from September 5-8, 2013.

Leitmotiv wishes to acknowledge the support of the Mayor of Fuengirola and the City Councilor of Culture, Esperanza Oña and Rodrigo Romero, respectively, as well as the vice president of the Provincial Council of Málaga, Ana Mata, BuySoundtrax Records, and all the public and private organizations that support PlayFest.

Young European film music talent will have another chance to win the highly sought after SABAM Award For Best Young European Composer.

This award was created by the World Soundtrack Academy and is worth € 2 500 and the live performance of the three finalists’ compositions by the Brussels Philharmonic conducted by Dirk Brossé during the presentation of the World Soundtrack Awards on 19 October at the venue ‘t Kuipke in Ghent. This is the official closing ceremony of the 40th Ghent Film Festival (8 - 19 October 2013).

Candidates must be younger than 36 years old and must be European or have been born in Europe.

Registrations will be accepted via this link
until 11 July 2013.

Every year, the Ghent Film Festival offers young talent the chance to win renown as a film music composer. This year is the eleventh award ceremony and the fourth time the event includes the whole of Europe. Candidates can follow in the footsteps of last year’s winner, Valentin Hadjadj and countless other important composers who attended previous editions of the festival, such as Angelo Badalamenti, Dario Marianelli, Gustavo Santaolalla, Hans Zimmer, John Powell, Maurice Jarre, Howard Shore, Alberto Iglesias, Elliot Goldenthal and many others.

The winning entry of last year, by Valentin Hadjadj:

The three finalists will be invited at a fantastic three-day visit in Ghent where they will have the opportunity to meet important people of the film music industry.

Candidates must be under 36 and will be asked to compose music for ‘The Big Shave’, a short film directed by Martin Scorsese in 1968. The Italian-American director has a very special connection with Belgium: he received his very first honour at the festival of experimental film in Knokke organised by the Royal Belgian Film Archive, where this shocking short film was a prize-winner. Scorsese gave the festival organisation permission to have a fragment of this legendary short film rescored for this composition contest.

The composition must be submitted by 12 August. A professional jury made up of people from the film and music worlds that also have international experience will judge the compositions. The Brussels Philharmonic, conducted by maestro Dirk Brossé, will perform the compositions of the three finalists at the 13th edition of the World Soundtrack Awards ceremony on October 19th at ‘t Kuipke in Ghent. Afterwards, the winner of the contest will be announced.

The rules for this composition competition can be found through this link.

The Ghent Film Festival is delighted to welcome the French composer Alexandre Desplat to the traditional film music concert during the second part of the World Soundtrack Academy award ceremony which will bring the 40th film festival to a festive end.

We have had the pleasure of his company at several previous WSA concerts but this will be the first time that Desplat, the most celebrated composer of his generation, will perform a selection of his incredibly rich and varied film compositions at ‘t Kuipke Ghent in front of an audience of 3,000 people and film music fans. Alexandre Desplat continues to amaze with the sheer volume of compositions he produces, yet without compromising quality and imagination in the slightest. Last year, he wrote remarkable music for no fewer than eight (!) feature films: the Oscar winning Argo by Ben Affleck, Zero Dark Thirty by Kathryn Bigelow, Rise of the Guardians by Peter Ramsey, Renoir by Gilles Bourdos, Reality by Matteo Garrone, De Rouille et d’Os by Jacques Audiard, Moonrise Kingdom by Wes Anderson and Cloclo by Florent-Emilio Siri. This year’s Cannes Film Festival programme features two more films for which Desplat has written scores: Venus in Fur by Roman Polanski and Zulu by Jérôme Salle.

Since his debut in the late eighties, Desplat already has 143 scores to his name and his international career includes collaborations with such leading directors as Terrence Malick (The Tree of Life), Roman Polanski (The Ghost Writer, Carnage), George Clooney (The Ides of March), David Fincher (The Curious Case of Benjamin Button), Stephen Frears (The Queen) and Jonathan Glazer (Birth).

This year’s Lifetime Achievement Award to be presented during the award ceremony of the WSA concert goes to the Italian composer Riz Ortolani, born in 1931 in Pesaro, Italy. Together with Ennio Morricone and the late Carlo Rustichelli and Nino Rota, Ortolani is one of the greats of Italian film music from the golden era of Italian cinema.

13th WSA & concert
Saturday 19 October at 8 p.m. at ’t Kuipke in Ghent
Performance by the Brussels Philharmonic conducted by Dirk Brossé
accompanied by film scenes projected onto a big screen