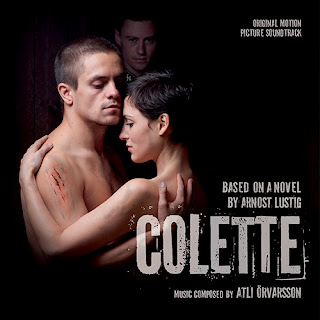 MovieScore Media has a new major release out: composed by acclaimed Icelandic Hollywood composer Atli Örvarsson (The Mortal Instruments: City of Bones, Hansel & Gretel: Witch Hunters, Chicago Fire), the original score for Czech/Slovakian WW2 drama Colette is a classical, thematic work for symphony orchestra that will attract fans of film music in the tradition of great and romantic soundtracks with an central european flavor, such as Schindler’s List and The Pianist.

The score release (CD/DIGITAL) comes via:

MovieScore Media/Kronos Records has released Atli Örvarsson’s powerful score for Colette, Milan Cieslar’s film adaptation of the novella A Girl from Antwerp by Pulitzer Prize nominated writer Arnošt Lustig. The film tells the story of an unlikely love affair that blossoms between Willie and a Belgian Jewess named Colette. The torrid romance is overshadowed by the Nazi occupation even though it’s very likely that the star-crossed lovers would have never met had it not been for World War II. Colette opens theatrically in the Czech Republic on September 12, 2013, and is expected to get international distribution later in the year.

The music for Colette was written by Hollywood composer Atli Örvarsson whose other current films include The Mortal Instruments: City of Bones (2013), based on the bestselling books by Cassandra Clare, and Hansel & Gretel: Witch Hunters (2013). The Icelandic-born musician began his film scoring career at Hans Zimmer's Remote Control Studios by contributing to the soundtracks of blockbusters like Pirates of the Caribbean: At World’s End (2006) and The Simpsons Movie (2008); his more recent scoring credits include The Eagle (2011), Evidence (2013) and A Single Shot (2013; available from MovieScore Media/Kronos).

Although he is well-versed in the world of major Hollywood productions, Colette provided Örvarsson with the chance to write music he had never done before. “When the opportunity to score this film came about, I realized that I didn't really have a good piece to send to the director as a demo” recalls the composer. “The first thing I wrote was the so-called Birkenau theme. Milan Cieslar really liked it a lot but he wanted to hear a love theme as well and, while I've composed a few of those, I had never written one that was suitable for this film. So I wrote that as well and sent to him before I was even hired to do the film! So, in truth, I've never demoed as much for any project but I really wanted to do this film so it was all worth it!”

The result is a score that is described by MovieScore Media’s producer as an “epic, romantic score with classical music sensibilities”. “We are very proud to release a score that shows a different side to Atli Örvarsson’s musical identity, a hugely talented composer who seem to be able to pull off basically anything,” said Mikael Carlsson who also is referring to the other current release by Örvarsson, the largely atonal “A Single Shot”.

MovieScore Media and its sub-label Screamworks Records have released over 200 soundtrack albums since the launch of the company in 2006. Among the many acclaimed albums in the catalogue are soundtracks for Let the Right One In (Johan Soderqvist),Pandorum (Michl Britsch), Centurion (Ilan Eshkeri), Conquest 1453 (Benjamin Wallfisch), four volumes of Merlin (Rob Lane et al), Triangle (Christian Henson), Submarine (Andrew Hewitt), JCVD (Gast Waltzing), Black Death (Christian Henson), In a Better World (Johan Söderqvist) and The Awakening (Daniel Pemberton). In its ‘Discovery Collection’, MovieScore Media has released world premiere recordings of scores by esteemed composers such as Michael Kamen, Basil Poledouris, Patrick Doyle and Dario Marianelli.

In 2012, an album released by MovieScore Media’s sub-label Screamworks Records, The Shrine (music by Ryan Shore), was nominated for a Grammy Award in the ‘Best Score Soundtrack for Visual Media’ category. MovieScore Media has been nominated to the International Film Music Critics Association Award for ‘Film Music Record Label of the Year’ six years in a row.

Kronos Records has been releasing quality film music since 2009 and has music composed by film music legends such as Akira Ifukube, Francesco De Masi, Carlo Rustichelli, Piero Piccioni, and George Fenton in its catalogue. Much like MovieScore Media, Kronos is also active in the field of discovering and promoting new talented composers, such as André Matthias, Jorge Aliaga and Kristian Sensini.