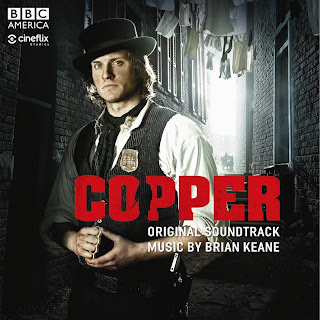 From the composer Brian Keane of the beautiful "Death and the Civil War" from last year, comes a new release: Copper - O.S.T. Here are some details on the score cd release (+mp3 version too) from amazon.com

Original music score from Grammy Award and multiple Emmy Award winning Composer Brian Keane. Alongside Keane is a who's who of American instrumentalists: Joanie Madden, leader of Cherish the Ladies, is featured on the Irish whistles for which she has been world-renowned. Eileen  Ivers, the Cherish the Ladies and Riverdance alumna who was also featured on the soundtrack of 'Gangs of New York'. Eric Weissberg, best known for the 'Dueling Bangjos' them to 'Deliverance' and his session work with Bob Dylan, Billy Joel and Art Garfunkel (to name a few), adds his firs-class 5-string banjo.